Brought to you this week by this chicken sandwich I had last Friday. It gave me strength.

Yearly reminder: unless you're over 60, you weren't promised flying cars. You were promised an oppressive cyberpunk dystopia. Here you go.

Has Europe lost its hold on our collective imagination?

One by one, the elements of the Europe story have fallen away. Democracy? European leaders, especially the Germans, have been openly canvassing the idea of “regime change” in Athens. The free movement of people? Hungary is planning to build a fence along its border with Serbia and David Cameron is hoping to build a metaphorical fence around Britain. The welfare state? The recent elections in both Finland and Denmark suggest that even in its Nordic heartland, it is no longer seen as a European value but as a national, even an ethnic, possession, to be kept for “our people” alone.
Solidarity? Who now believes that the average person in Frankfurt or Helsinki sees the pensioner rummaging in a bin in Thessaloniki as a fellow citizen? Thresholds of decency?

As I told the friend who shared this with me: not to make it “all about America,” but this article from an Irish writer/editor about mid-late 20th century Europe reflected a lot of wide trends we can see in American history and self-perception, too. This is a wider trend. This piece makes the argument that the post-WW2 vision of the world, developed after cataclysmic death and destruction, has slowly eroded away in the decades since. That vision included the myth of our benevolent, progressive nationalism, and social responsibilities people had towards each other as citizens of the same nation, but now we’re seeing the downward slope of that story. That other side involves a conservative policymaking rooted in this completely false idea of hyper-rationality- that the social nets and responsibilities developed after disastrous, world-ending war are immature fairytales that never “really” existed in the first place.

tl;dr: we’re choosing the grimdark, Game of Thrones brutality-oriented reboot for the next phase in our evolution and we’re too stupid to realize it. It’s going to be terrible. 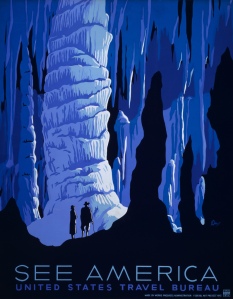 From Camera Clubs to Syphilis: The WPA’s Practical, Modernist Posters

The posters for the Federal Theater program, United States Travel Bureau, and other State Departments hold up surprisingly well with their direct messages and simple designs. At a time when unemployment was at almost 20%, these posters encouraged people to get out and explore their country and participate in local life in defiance of the hardships of the Great Depression.

Do they still offer tours of America’s Natural Dick Caverns? I WOULD LIKE TO BE IMPRESSED.

Screen Addiction is a new way for kids to be blithe and oblivious; in this sense, it is empowering to the children, who have been terrible all along. The new grandparent’s dilemma, then, is both real and horribly modern. How, without coming out and saying it, do you tell that kid that you have things you want to say to them, or to give them, and that you’re going to die someday, and that they’re going to wish they’d gotten to know you better?

I rarely have comments to add when I link to things from the Awl because everything on that site speaks for itself with such sadness and anger that I don’t want to get in its way. The Awl is a strange site that 1) has a mood and 2) that mood reads “the sad fury that I must be alive in a terrible city in order to accomplish all this nothing.” How do you curate and edit that?? I’m impressed. Or maybe it’s the font that makes me sad.

If Male Actors Were Described The Way Female Actors Are

When the waiter comes over, Zac Efron orders a sandwich with the exuberant joy of a beautiful, thin woman freed by pregnancy. “A Reuben, please,” he says, “with extra corned beef. No, wait! And extra Swiss. You know what? Extra dressing, too.” He giggles and hands the menu to the waiter. “I’m so bad! But I can FINALLY eat whatever I want.”