a top row of teeth slide out, then slide back out of sight.
slow wide circles, quickening sprints.
the perfect slot will reveal itself;
it just takes patience, gripping, waiting.

An excerpt from a poem that appears in Barrelhouse‘s POP Love! series. They’ve collected so many funny, dreamy, outrageous takes on romance this month; I’m so glad I could contribute my take on the erotics of professional hockey. Read the piece in full here.

It was an accident. An accident? It was the steady ground suddenly tilting into the steep sides of a gorge, and the shitty path and its shitty cracks turned into crumbling rock giving way under shittier shoes, the ones that were going to be thrown out and replaced with the new season because these had paid their dues and there was supposed to be just enough traction for a few more weeks of Weather, before Weather gave way to Heat.

It was an accident in that it happened, it was done, and they were asleep at the bottom of the gorge and it was too steep and too far to get them. Someone else would have to get them.

The above is from a new piece that appears in the December issue of Split Lip Magazine. You can read the full piece here.

It had been a long night of extrajudicial murder for Batman; riding out the adrenaline just barely got Bruce Wayne back to his lair under the river.

Man, for someone completely uninvested in the DCEU, I had a lot of thoughts about Batman v Superman, so I… wrote about it. This features Batman and The Flash, Superman, Wonder Woman, and my exasperated long-suffering fave, Perry White.

FreezeRay Poetry included my flash fiction piece, “Metropolis Unwinds,” in their Issue #11 this month. Read the full issue at FreezeRay and my piece in full.

Listen—one day you’re gonna find yourself out in the ocean,
in the world, and you’re gonna stop and feel the electric
heartbeat of the entire world in the water around you—
down here, no one is ever alone.

This spring, Strange Horizons put out a call for their summer special, Our Queer Planet. The excerpt comes from my poem chosen for the series, “A Mergirl Speaks of Travels,” which follows a queer scientist-explorer in a futuristic aquatic Earth.

You can read the full poem at Strange Horizons and listen to it here.

I’m currently reading Rise of the Rocket Girls by Nathalia Holt, the #wlclub pick for May. I wrote this post for the #wlclub google group and decided to store it here as well because it’s about a thousand words on how to patronize female historical subjects and exploring how/why that may happen.

END_OF_DOCUMENT_TOKEN_TO_BE_REPLACED

I was grown in a shallow dish with sides low enough that I could see photos of my baby girl self on every wall.

You should be reading Web Safe 2k16, a collection of deeply creative short stories (216 words max) remembering the old internet of the 80 and 90s, I suppose the minutes before facebook devoured us all.

You can read my piece in full, and more about Web Safe 2k16.

What would you do with unlimited power?

Over at Open Letters Monthly, I’m thrilled to have a poem in their February 2016 issue.

I do love this poem a stupid lot; it came out of a collection I worked on about two years ago. A lot of the poems and prose poems were unsalvageable, but I’m still circulating some in hopes of getting them published. The poems riffed on mythology and women from my favorite stories (female characters from history, myths, and literature) and I’m glad that if any part of that collection sees the light of day, it’s this one. (Maybe the Mary Shelley one, too.)

My short story, “Drink, Kill, Contract,” appears in the anthology Dear Robot: An Anthology of Epistolary Science Fiction, edited by Kelly Ann Jacobson. You can purchase the anthology here and read more about the anthology below:

Dear Robot is an anthology of nineteen science fiction stories told in a variety of epistolary styles. Letters, scientific notes, manuals, and emails all tell different stories about the future. From a behavioral contract for interstellar exchange students to a transmission from an astronaut in space, these sometimes humorous, sometimes heartbreaking stories all use their structure to amplify their message-especially when that message is that a band of deadly robots are chipping away at the door.

For weeks after reading Emily St. John Mandel’s Station Eleven, I couldn’t get it out of my head. So, for The Rumpus’s The Last Book I Loved series, I wrote an essay that tries to explain why it has the best portrayal of life-after-the-apocalypse. It showed how delicate and human our technology is, how they are extensions of ourselves, and how much we would miss them when they were gone. It captures so well the element of civilization’s collapse, people longing to have everything they once had, all while moving on to make new lives for themselves.

Station Eleven is a love letter to technology, one I never could have written myself.

Love letters require distance, and when it comes to me and technology, I can’t put any distance between us. I learned to type as I learned how to read and write. I’ve had computers and the Internet almost as long as I can remember, and a cell phone a little less than that. I’ve memorized three phone numbers, some Latin conjugations and declensions, the complete scripts to five or six movies from the late 1990s, and probably nothing else. When almost every fact available in all of human knowledge has been stored somewhere online, why would I bother storing anything but the most important things I’ll need to access over and over again?

Read the rest at The Rumpus. 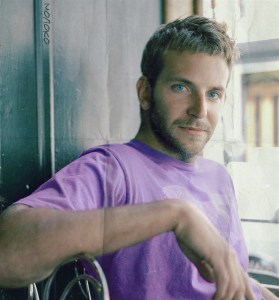 I’m so happy Atlas and Alice picked up this short and absurd piece that’s disgustingly close to my heart.

A) ME AND BRADLEY COOPER (PRE-HANGOVER)

There’s a quality like sweetness. It’s made of soft lighting, smiles, laughing with you but not at you. It grows in small spaces. Alias set scenes with Will Tippin in a too-small-for-tv apartment, a space where Jennifer Garner could hide from her premise and fate.

Read the rest at Atlas and Alice.